Due to the several technological development and innovations, which have transformed how people communicate, information has become abundant and available to almost everyone (Aouragh & Alexander, 2011). Through a click or touch of button, an individual can access massive volumes of information. With the increasing number of self-described and international organizations, such as Facebook, Wikipedia and Wikileaks, much of the information is frequently biased and opinionated, nevertheless truthful. Presently, social media has had a significant effect on business, culture and largely on the world. In the US alone, studies have shown that about 47 per cent of adults use social networking sites, such as Twitter, Myspace, Classmates.com, and LinkedIn (Hermida, Lewis, & Zamith, 2014). The impacts of this technological innovation are evident in business, politics and socialization. In this regard, this paper focuses on the effect of Twitter on the society, and its influence on the Arab Spring.

Literatures concerning the influence of social media frequently relate the inception of social to the inception of television in the 1980s (Eltantawy & Wiest, 2011). Current studies on social media are focusing on the sociological and psychological mechanisms that lie beneath. The implausible connectivity between people provided by social media, coupled with the high speed at which users exchange information and the potential global reach, has considerable empowerment on users. The best way of estimating the degree of the empowerment is by looking at how users managed to join from their early use. Users of both Facebook and Twitter can provide extemporaneous snapshot of their minds (Hermida, Lewis, & Zamith, 2014).

As revealed by a rich literature on social sciences, Facebook has reached the billion-user landmark and it has transformed the way people interact with each other (Wilson & Dunn, 2011). The founders of both Facebook and Twitter might have expected this impact. However, they did not anticipate social media to play the role of igniting revolutions and modifying changes in regimes as discussed in this paper.

The usage of Twitter, as a social media, has increased rapidly since its inception in 2006. Recent statistics indicate that Twitter has about 200 million active users (Wilson & Dunn, 2011). Twitter has played several roles in the modern society. In relation to politics, it has been recognized for facilitating protests, which are normally referred to as Twitter Revolutions. Examples of such protests include the 2009 Iranian election protests, and the 2011 Egyptian revolution.

As a service, Twitter has been utilized in classroom to facilitate education. According to Wilson & Dunn (2011), it is very popular at colleges and universities, where its usage has increased student interaction. For instance, in large lecture hall, Twitter is an excellent tool for class sessions. Aouragh & Alexander (2011) conducted a study concerning the effect on Twitter on classroom learning and found out that classrooms using Twitter experience better communication between students and the staff. In addition, this mode of learning has encouraged increased student participation and improved grades.

Disaster management and reporting has also witnessed a tremendous impact of Twitter. As a tool, it has been used in reporting most current and unfolding news. Aouragh & Alexander (2011) defined this phenomenon as de facto emergency. However, Twitter was not initially intended to perform this function. It has proved to be effective in communicating the most up-to-date activity, especially natural disasters. For instance, during the California earthquake, Twitter was a major source of information to the public.

To a tech-savvy person involved in the engineering of the uprising across the Arab World, news headlines, such as Twitter Rebellion and Facebook Revolution, seemed ridiculous. The recent revolutions have resulted in some significant and successful change of regime, including Egypt, Libya and Yemen. According to Khosrokhavar (2012), social media does not overthrow government but people do. Hermida, Lewis, & Zamith (2014), on the contrary, claimed that it is erroneous to dismiss the role of technology in the Arab Spring.

Instead of an individual who would have motivated people to start a revolution, Twitter was the main channel that accelerated and facilitated the Arab Spring. As such, it is extremely likely that without Twitter, the Arab Spring would have evolved more slowly. According to Khosrokhavar (2012), Arab Spring would never have reached global opinion without Twitter. Similar to Facebook, Twitter was not a ghost in the machine. It was a catalyst to the incipient patterns of the popular uprising. Twitter not only sped up information exchange but also provided exceptional waves of spread.

Evidently, as pointed out by Wilson & Dunn (2011), the ability to share a tremendous volume of accurate and uncensored information throughout Twitter has significantly contributed to the cause of several Arab Spring. According to Khosrokhavar (2012), through social media sites, Arab Spring Activists have acquired the power to overthrow historical dictatorship and assist Arab civilians become aware of the crucial issues affecting the Arab society. In nations, such as Yemen and Egypt, the indicators of uprisings, such as protests, have been planned and organized via social networks. Studies conducted by Khosrokhavar (2012) noted that Arab Spring Activists from Egypt used Facebook to schedule the protests, and Twitter to coordinate. The responsibility that technology has assumed in enabling the distribution of public information, such as the kinds stated above, has been necessary in establishing the democratic movement, which has assisted guide the abused civilians to overthrow dictators.

Social media have also gotten rid of fear, which is a psychological barrier, by assisting several persons to connect and share information. It continues giving the people of the Arab World the knowledge that they are not alone, that there are other persons witnessing the same cruelty. For the first time, social media sites have provided activists with the opportunity to disseminate quickly information while evading government restrictions. However, Hermida, Lewis, & Zamith (2014) maintains that it is significant to comprehend that social media did not cause the Arab Spring, but it facilitated communications, which helped the revolutions in the end.

A study launched after the fall of Ben Alis government offered a different cyberpsychological take on how Tunisian internet users recognize the contribution of Twitter to the revolution. The study involved analyzing sizeable quantity of text from internet users in Tunisia. The study offered a bottom-up approach to the new social uprisings that depend on virtual environments rather than the dominant top-down approach of orthodox revolutions, which are facilitated by leaders. According to this study, the sophisticated interconnectivity between the persons who participated in the Twitter revolution revealed patterns of accumulating change. As a result, the synchronicity and homogeneity of the cyber-activism networks explains the likelihood of a Twitter-facilitated revolution. Eltantawy & Wiest (2011) supported this explanation by linking such a revolution to the virtual collective consciousness (VCC). VCC refers to internal knowledge common to a plurality of persons.

Alongside social media activism, VCC emerges as a new form of consciousness through communication tools. According to Hermida, Lewis, & Zamith (2014), VCC can be perceived as the more recent new collective consciousness of describing the computation history of shutting down the internet during the Egyptian revolution. As a result, VCC has to be timely, rapid, acute, purpose-oriented, and domain-specific. The figure below shows a tentative model explaining the dynamics of the virtual collective consciousness as derivative of sophisticated interactions between internet users within a social networking platform (Hermida, Lewis, & Zamith, 2014). 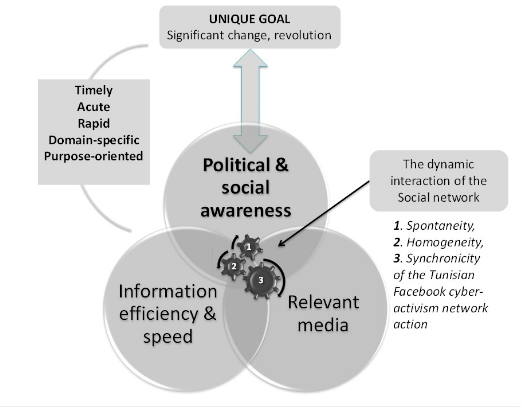 With increasing globalization witnessed in the 21st century, Hermida, Lewis, & Zamith (2014) pointed out that the new geopolitical landscape facilitates the new vision of democracy. In this vision, ordinary citizens might become more empowered than before to select an alternative system and initiate changes in policies. Khosrokhavar (2012) showed anticipation for such universal citizen behavior prior to onset of the Arab Spring. In his work, he offered nine key principles concerning how ordinary citizens can regain the control of decisions directly affecting their lives.

An important lesson learned from the Arab Spring is that a new revolution breed, referred to as leaderless revolutions, have begun, and that social media and VCC facilitate them. This is not an implication that leaders cannot play a crucial role in such contexts. Khosrokhavar (2012) pointed out that the uprisings in the Arab world have not magically delivered stable governments and flourishing economies. However, the Arab Spring has indicated to the world that revolution is possible when activists combine social media with brave citizenry.

The impacts of this technological innovation are evident in business, politics and socialization. The implausible connectivity between people provided by social media, coupled with the high speed at which users exchange information and the potential global reach, has considerable empowerment on users. Through social media sites, especially Twitter, Arab Spring Activists have acquired the power to overthrow historical dictatorship and assist Arab civilians become aware of the underground communities.